Difference between revisions of "Category:Heidelberg:REGI"

The Committee on Regional development in Heidelberg will focus on the power shift from centralised to decentralised distribution systems. With EU citizens' growing awareness of environmental issues, new technological developments and smart power grids on the horizon, a shift towards a distributed system that includes consumers and turns them into co-producers is a possible future for Europe's energy union. There are many challenges that have to be met before such a transfer can take place: The liberalisation of the energy market is still not fully implemented and few investments are in place to fund distributed systems. Moreover, the data recorded through power grids raises questions concerning data storage and protection and there is currently no strategy on who would regulate a European-wide power grid and how. Finally, many citizens seem to be “energy illiterate”, lacking the necessary knowledge to participate in a new decentralised system. To overcome these obstacles and ensure a bright future for distributed systems in the energy union is what REGI will cover in committee work and resolution.

The Past: Distributing energy the traditional way

While energy production reliant on coal and other fossil fuels decreased over the last 20 years and the percentage of renewables in the EU's energy mix is steadily increasing, the long-awaited energy revolution has yet to start and the EU's amount of energy production is decreasing as a whole.[1] Especially in times where demand and consumption are still steadily increasing, this become more and more of a problem.

Energy distribution systems are traditionally centralised and one-directional: A power plant of any kind generates the energy that is then transmitted. Distribution systems then proceed to, as their name would suggest, distribute the energy to the consumers.[2] Nowadays electricity also tends to take over other forms of energy as well, as shown by the rising popularity of electric cars. This may accelerate the ever-growing demand for energy even further. On the infrastructural side of things, the ageing energy infrastructure of most Member States should also be taken into consideration. This stands in stark contrast with many modern energy-related technologies such as smart grids, renewable energy sources as well as energy trading systems.


With decreasing EU energy production but increasing demand and consumption, geopolitical issues such as the EU-Russia tensions that have significant influence on fossil fuel imports into the EU gain relevance.

The Present: Obstacles to be addressed

As of now, almost all of the energy distribution is done within centralised systems. Investments into the technology of smart grids have been relatively low and are coming from governmental resources only. Furthermore, the energy market rules would have to be newly defined and the roles of Distribution System Operators (DSOs) and Transmission System Operators (TSOs) would change fundamentally.


Energy markets are often unpredictable and uncontrollable, which is why the question whether affordable energy prices for consumers can be assured has been raised. Apart from that, only large infrastructure programmes have been funded.

In the current system, the user is a passive consumer, always dependent on utility companies and ignorant of how the energy system works. As it is uncertain whether benefits would outweigh the costs for consumers and the liberalisation of the energy market is still ongoing. On the question whether a possible European-wide power grid should also be regulated on a European level, opinions are divided. On top of that, it is still uncertain how consumers are going to be motivated to become co-producers of energy, how the required knowledge about grid possibilities is spread as well as how the public can become involved in large-scale projects.

Data protection is a hot topic when talking about the possibilities and opportunities of smart grids. The recording of consumers' energy usage data creates a new data risk and opens the door for exploitation if no preemptive measures are taken. Cyber attacks disabling the grid could have dramatic consequences, questioning its reliability. With the introduction of smart grids, huge amounts of data would need to be stored.

The Future: Smart grids - an outlook to what is possible

In theory, the efficiency of energy usage would heavily increase in a smart grid-based system, as energy would be used more efficiently and energy overflow could be avoided. The flexibility of the power grid would therefore be increased, as information on the energy use of residentials enables its efficiency.


The EU's smart grid task force presented a possible model for the various actors, their relations and tasks. In its opinion, there should be information and data exchange between the suppliers and aggregators as well as DSOs and TSOs. The generated energy would get to the supplying and aggregating parties through a balance responsible party through some sort of financial adjustment mechanism. Consumers could that way get access to the energy as well as obtain grid access. The aforementioned balance responsible parties would serve as the interface with the power exchange market.[3] 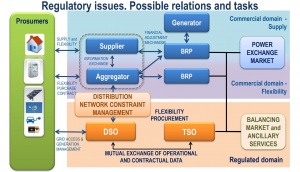 Possible tasks and relations in a smart grid system according to the European Commission's Task Force on Smart Grids.

Through the introduction of smart grids, consumers turn into co-producers of energy as they actively participate in the energy grid. As outlined in the section above, this is only possible through an increase in energy literacy of citizens connected to the smart power grid. Subsequently, the decentralisation of energy through the means of smart power grids is only possible through the empowerment of the citizens connected to it.

In a smart grid system, both electricity and information are exchanged, which is why interoperability within smart power grids has to be ensured. The reporting of energy usage would increase the efficiency of energy distribution. The European Commission has come forward with various possible systems for managing the data recorded in a smart grid. This includes delegating the responsibility of market facilitation to DSOs, introducing third party market facilitators and an independent central hub as well as solving the problem through Data Access Point Managers. 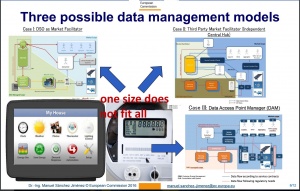 Furthermore, the technology microgrids should be kept in mind, as they could counteract possible security risks for the grids and manage the power grid at a regional and local level.


One suggestion for an open model for the consumption data flow allows energy service companies to have dynamic data access to both production and consumption of energy in a household. The supplier would also get access to the energy used by a household, enabling a dynamic flow of energy. An interface would record said data, making a note of the amount of energy, gas and hot water being used. Additionally to the dynamic data access, historical data access would be saved through secure data transmission to then be forwarded to suppliers and energy service companies.

As consumers would be more likely to install renewable sources of energy (e.g. solar panels) in a smart grid system, democratising energy distribution pushes decarbonisation even further. Additionally, consumers have a greater, more active influence on the amount of renewable energy in Europe's energy mix.

The Actors: Who is involved

The European Commission is the main initiator of European law drafted. Its staff works in a wide variety of different fields and is divided by topics, the so-called Directorates Generals. The Directorate General on Energy deals with all matters related to energy, including the future of smart power grids. It reports to the Commissioner on Energy Miguel Arias Cañete as well as Vice-President of the Commission Maroš Šefčovič who is focussed on the establishment of the Energy Union. The Directorate General is divided into several Directorates. The task force on smart grids works within the framework of the Directorate General on Energy and is lead by Manuel Sánchez-Jiménez. It is noteworthy that the field of energy falls under the group of shared competences for the EU.

The national and regional execution of smart grids and similar technologies still lies in the hands of the Member States and their ministries responsible for energy of course. On the technical side, the various different distribution systems should be taken into account, since one of the reports of the European Commission found that using existing infrastructure is one of the key lessons learned.

The EU citizens have the ground-breaking opportunity to turn from consumers in the old-fashioned power grid system into contributing prosumers in an advanced smart grid system, thus boosting energy efficiency as well as decarbonisation.

The roles and responsibilities DSOs and TSOs would have will change fundamentally when applying the smart grid idea and should therefore be taken into account.

With smart grids revolutionizing the energy market as we know it, the future of energy service companies is equally uncertain. What role they will play and especially what the regulatory framework around them should look like is to be defined.

Measures in Place: What has been done

The Energy Union has become more and more important in the recent years. Its goal is it to ensure secure, affordable and climate-friendly energy across the EU.[4]


2012 was also the year when European Commission prepared for the roll-out of smart meters.[9] They followed up with a recommendation for the data protection of deployed smart meters as well as smart grids in general.[10]


In preparation for the upcoming legal measures regarding smart grids and technology connected to it, the European Commission released a communication document in 2011, presenting various challenges connected to smart grids, such as funding of smart grid projects, technical standards across the continent, data protection, a regulatory framework, a competitive and open retail market and the continued support for technology and systems behind a smart grid system.[11] That was followed up by a similar document in 2012. This time the European Commission outlined the benefits of an open, integrated and flexible energy market and how to get the most out of the internal energy market.[12] How public intervention could have fundamental influence on the energy market was brought up for the first time in 2013 by the European Commission.[13][14]


In the middle of 2014, the Directorate General on Energy released a report on benchmarking results of smart metering deployment, naming the usage of available standards and the right set of functionalities to ensure interoperability and guarantee data protection, the need for a specific data privacy and security framework and getting the consumer on board as the key lessons learned from pilot programmes.[15]


The funding of smart grid technologies was up to € 3.15 billion in 2013, while 26% was invested in research and development and 74% in Demo and Deployment. The main investors at the moment are France and the United Kingdom, followed by Germany and Spain. 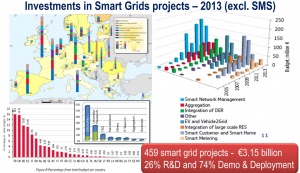 Funding of smart grid projects in the EU as of 2013.

The European Strategic Energy Technology Plan (SET-Plan) aims to accelerate the development and deployment of low-carbon technologies. It seeks to improve new technologies and bring down costs by coordinating national research efforts and helping to finance projects.
The Trans-European Energy Networks (TEN-E) – are programmes set up by the EU for the implementation of the European Single Market. The Trans-European Networks aim at "linking island, landlocked and peripheral regions with the central regions of the community”.

Moving on from a past of the traditional power grids is hampered by various present obstacles such as distribution and transmission system operators as well as energy service companies stuck in the past, lacking knowledge of consumers and possible security risks. The rewards for a transfer towards smart power grids include an energy efficient, decentralised system that includes consumers as co-producers and pushed for the systematic decarbonisation of Europe's energy production.

This category currently contains no pages or media.