Difference between revisions of "Category:Heidelberg:AFET"

In 2016, Europe imported 53.5% of its energy needs.[1] In the coming years Europe's energy dependency is expected to increase, also due to the decline of domestic gas production in Northwestern Europe.[2] Given that the reform of the EU’s Emission Trading System (ETS) will lead to a coal-to-gas switching in the electricity sector, natural gas will continue to play an important role in European energy demand. Today, EU countries face three options: cutting back on consumption, develop their shale gas resources or increasing imports. Renewable energies will show strong growth but, despite their centrality in switching to a green energy market, will still need to be complemented by gas.[3] Therefore the EU is working to develop a new foreign policy which will further secure gas supply in the future. 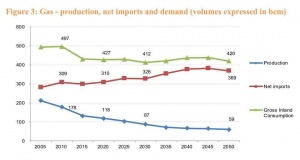 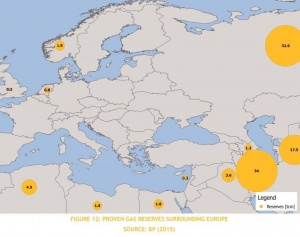 About one quarter of all the energy used in the EU is natural gas, and many EU countries import nearly all their energy supplies, such as the United Kingdom (45.5%), France (46.1%), Germany (61.4%), Spain (72.9%) and Italy (75.9%).[4] Some of these countries are also heavily reliant on a single source or a single transport route for the majority of their gas.[5] For the time being, Russia remains Europe’s largest gas supplier, followed by Saudi Arabia and Norway.[6] The high level of mutual dependence involving the two sides may be the key for a future settlement: the European Union relies on Gazprom (the only producer and exporter of liquefied natural gas (LNG) in Russia) for about a third of its natural gas supply, and Russia earns significant revenue from selling gas to Europe.[7] Yet, in 2017 17% of the global population lacks access to electricity.[8] Energy poverty in Europe is still a relevant issue, as it affects nearly 11% of the EU population. Due to rising energy prices, low income and poor energy efficient homes, particularly prevalent in Central Eastern and Southern Europe (notably Bulgaria[9] and Greece[10]) around 54 million people in Europe cannot afford to adequately heat their homes at an affordable cost.[11] In order to secure gas supply for all and prevent shortages, the EU countries need to be prepared to manage gas supply disruptions if a crisis occurs, both concerning infrastructure and geopolitical tensions. For this reason, the EU is concentrating on developing an effective emergency response, alongside improving gas transmission systems and maintaining stable foreign relations. 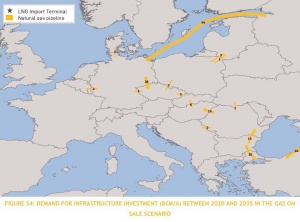 The challenges that the European Union and its Member States have to face in securing gas supply concern mainly infrastructure and geopolitical tensions. On one side, infrastructure failure can cause disruptions along gas transport routes and, on the other, supplies can be endangered by political disputes.[12]

Safety refers to achieving an acceptably low risk to life and health in the design, construction, operation, and decommissioning of a system. Some EU countries have either inefficient or lack energy infrastructure. In the Baltic countries the absence of energy interconnections with the energy systems of Northern and Western Europe, represents a risk for their energy security.

Member States have different standards for daily operations and technical construction of gas pipelines. For this reason project execution and time delivery of projects can be problematic. The European Parliament believes that a higher degree of standardization will ease the integration and transmission among countries. In fact, the parts of the interconnected transmission system within national borders are owned and operated by national entities. The pipeline capacity is allocated on a national basis even if more than 60% of the EU’s gas supply crosses more than one national border.

Transmission pipeline investments expenditures are very high. The payback time is long and the uncertainties and risks are many. The recovery of those investments is mainly based on long term agreements. Therefore private investors unlikely will ensure sufficient capacity for gas supply at a national level. For this reason, the investors in the pipeline transmission capacity inside the EU are primarily state-owned Transmission System Operators (TSOs), who have natural monopolies as they build, own and operate pipeline infrastructure.[13] As a consequence, the diversification of gas supply is limited.

Europe’s gas suppliers are poorly diversified. However, this implies various risks concerning security of imports. In the gas sector, Gazprom enjoys a complete monopoly on many EU countries (such as the Baltic States). As a consequence the supply of natural gas may be limited or stopped or its price may be lifted at any time without warning. The possibility that Russia may use these instruments to create direct political or economic pressure on national governments, or as a means of sanctioning, is even a greater risk.[14] Already in 2009 Russia cut gas exports via Ukraine towards Europe of 60%[15] and in 2014 forced the EU to act as a guarantor for Ukraine's gas purchases from Russia following the Crimean crisis.[16] Nonetheless in 2015, Russia halted natural gas supplies to Ukraine. Gazprom said it had halted gas deliveries to Ukraine because it had used up all the gas it had paid for, while the Ukrainian government claimed that the cause was buying gas from cheaper suppliers.[17] Today the European Parliament believes that the framework ensuring fair and non-discriminating access to natural gas networks and a free flow over national borders, established through the creation of a European Energy Union and gas network codes,[18] is in need of improvement.[19] Specific problems arise in the case of cross-border pipeline projects involving different regulatory framework. There is no clear mechanism for the resolution of potential conflicts and the rights and obligations of stakeholders can differ according to the Member State. Additionally the nature of the gas market may be incompatible between two countries connected by a pipeline, and therefore the integration of different legal regimes may increase the transaction costs of constructing and operating a pipeline.[20] Cooperation between Member States and ensuring regulatory coherence are necessary to secure Europe’s gas supply. Alongside the aforementioned issues, Member States have different interests concerning gas supply. Poland believes that the Nord Stream 2 project is not consistent with the objectives of the Energy Union, as it does not give access to new sources of gas, but strengthens the position of Russia as the largest natural gas supplier in the European market.[21] While Germany is more focused on the liberalisation of the energy market, opening the market for electricity rapidly, boosting competition in energy supply firms and product prices,[22] Poland is trying to secure its energy supply while slowly shifting towards more sustainable energy sources. In fact, coal dominates the power sector of Poland, where it is still the largest source of greenhouse gas emissions as well as a major employer.[23]

Energy as a shared competence

Energy is a shared competences of the EU, therefore both the EU and Members States are able to legislate and adopt legally binding acts. EU countries exercise their own competence where the EU does not exercise, or has decided not to exercise, its own competence. The energy policy of the EU has three main objectives: security of supply, competitiveness and sustainability.

The Commission's second Strategic Energy Review (2008)[24] and the Commission's Green paper "Towards a secure, sustainable and competitive European energy network" (2008)[25] have not been enough to provide an efficient framework for investments and European integration in gas networks. For this purpose the European Commission has launched a European Energy Union in 2014 to ensure secure, affordable and climate-friendly energy for EU citizens and businesses.[26] The Energy Union is meant to assure the free flow of energy across borders, the employment of new technologies and renewed infrastructure,[27] building on the 2030 Energy and Climate Framework and the Energy Security Strategy. The 2030 Energy and Climate Framework works on competitiveness and security of the energy system, such as price differences with major trading partners, diversification of supply, and interconnection capacity between EU countries.[28] The Energy Security Strategy sets out short-term and long-term measures aimed at increasing energy efficiency and production, building missing infrastructure, achieving cohesion and transparency amongst Member States on external energy policies, and strengthening the solidarity mechanism between the EU countries.[29]

On 27 April 2017 an agreement on a new Security of Gas Supply Regulation was reached. The Commission proposed an update of the Security of Gas Supply Regulation of 2010 in order to help prevent potential gas shortages and respond to them if they happen. The new rules ensure a regionally coordinated and common approach to security of supply measures among EU Member States. This will put the EU in a better position to prepare for and manage gas shortages if a crisis occurs. The main improvements are:

The European Commission, together with other stakeholders, discussed the main challenges in implementing network codes and guidelines concerning gas networks. The main aim was to provide an integrated European energy market. Member States have agreed to harmonise the rules under which markets and system operations are governed via network codes and guidelines now part of the Third Energy Package (2009). The third package enhances the functioning of the internal energy market and resolve structural problems. It covers five main areas:[32]

The fact that energy is a shared competence of the EU could represent an opportunity to standardise legislations concerning gas transmission infrastructure across EU countries, as well as developing a Europe-wide legislative framework to support the market and the security of gas supply. However, there are many boundaries to power exchanges in Europe. The european network of transmission system operators for gas (ENTSOG) published the 2017 edition of the Ten year network development plan (TYNDP), which offers a view on what is needed to achieve Europe's climate objectives by 2030. The package identifies investment needs, proposed priority investments and stresses the importance of the creation of the single European market for gas.[33] The gas infrastructure limitations, which locally lead to high dependence or an inability to sufficiently diversify supply sources, would also have an impact in terms of competition. More specifically, the isolation of Finland prevents the country from mitigating a high Russian supply price. Lack of infrastructure also prevent the Baltic States to share the benefit of their access to LNG with Finland. In Central-Eastern European countries, Russia remains the main gas supplier causing low level of competition. Barriers prevent Greece from sharing its access to LNG with Bulgaria. In Romania, the lack of interconnection does not allow for Romanian national production to export towards neighbouring countries. Barriers preventing the Iberian Peninsula to fully share the benefits of its access to LNG with France have been identified. The access to LNG in the United Kingdom, France and Belgium cannot benefit countries to the East to their full potential.

Once infrastructure efficiency is achieved, the network can be further enhanced. The future of gas infrastructure also includes synthetic gases and hydrogen. The power-to-gas system is a technology that converts electrical power to a gas fuel. This is a unique opportunity to optimise renewable generation of energy by connecting it to the already highly interconnected gas transmission network. This would offer efficient and low cost energy transmission and long-term storage in the gas system, while saving investments in new electricity infrastructure.[34]

This category contains only the following page.